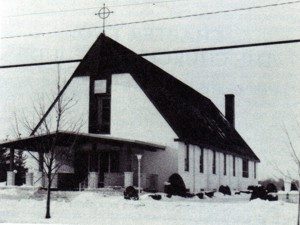 The history of St. Jude’s parish in Londonderry, New Hampshire is the story of a handful of faith-filled people who longed for God to dwell in their midst. It is the singular story of tremendous faith, tireless energy and heroic personal sacrifice and commitment to raise a fitting dwelling wherein the living presence of Jesus Christ in the Eucharist might dwell among them.With apparently so few Catholics in the community, the project seemed an impossible one to undertake successfully. How fitting it was to name the new parish after St. Jude – the Saint of the Impossible. (Church Dedication Booklet 1954).

In 1946 a spokesperson for several Roman Catholic families in Londonderry contacted Blessed Sacrament Parish in Manchester and asked if a weekly Mass could be celebrated near the center of the Town of Londonderry. On December 1, 1946, Bishop Matthew Brady issued a decree making Londonderry a mission of Blessed Sacrament and weekly Sunday Masses began to be celebrated at the Mayflower Grange Hall. On Saturday evenings, volunteers would clean the hall and set up chairs for the next morning and take them down after Mass. Many of these dedicated volunteers who sacrificed for the establishment of a new parish in Londonderry have gone to their heavenly reward. But, their vision and sense of building a community of faith was not in vain.

Shortly thereafter, Bishop Brady, on the petition of Reverend Walter L. Dee, pastor of Blessed Sacrament Church, gave his permission for plans to be drawn and construction was started for a church building on the present Mammoth Road site. During the following two years the church was built under the guidance of architect Leo Provost. In this period, the existing stained glass windows were obtained from the chapel of Grenier Field Air Base (the present Manchester Airport). The church was completed on October 2, 1953 and on October 11, 1953, was officially transferred to become a mission of St. Francis of Assisi Parish in Goffs Falls.

The original St. Jude Parish Church had a seating capacity of 350 and two Masses were scheduled each Sunday at 8:30 AM and 10:30 AM. The size of the church was justified since it was filled to near capacity at each Mass. The Sisters of Mercy from Manchester came each Sunday to instruct the children in the faith (CCD). Today, St. Jude seating capacity is 425 (with folding chairs in the wing and two television monitors). Four Masses are scheduled each weekend.

It was while St. Jude was still a mission church that the current rectory was completed. On November 3, 1960 the Rev. James Markham was appointed administrator and took up residence. It was by decree of Bishop Ernest Primo that St. Jude became a parish on June 22, 1962 and the Rev. Gerald Joyal was named the first pastor. The Rev. Thomas Donnelly followed him, October 8, 1969 to March 15, 1982.

On June 15, 1982 Rev. William J. Shanahan became pastor of St. Jude and soon realized that church housing St. Jude Parish was too small for the growing parish. As a result of a focus on meeting the need of current and future parishioners, dedicated members of the parish embarked on fundraising efforts and a large addition was started in 1986 and completed by Rev. W. Timothy Thibeault when he became pastor on September 30, 1987. Rev. Marcel Allard followed Rev. Thibeault on June 18, 1998 and on June 19, 1999 pastor Rev. Robert Couto was appointed. Rev. Robert Cuoto served the St. Jude Parish Community until his passing on December 10, 2014. Currently, the Diocese of Manchester has appointed Deacon Marc Payeur as Administrator of the church until a new pastor has been found.

Between October 16, 1969 and June 1, 1992, six priests served the community as Associate Pastors including: Rev. Thomas J. Bresnahan, Most Rev. Francis J. Christian, Rev. Edmund G. Crowley, Rev. Msgr. Donald J. Gilbert, Rev. John R. Poirier and Rev. Raymond O. Blair. Today St. Jude is a strong, active and vibrant parish due to the faith and effort of many dedicated and involved parishioners, current and past, along with a new generation of highly skilled and motivated staff dedicated to preserving the faith, educating our youth and meeting the needs of many who seek our help or desire to grow in their faith. We can never forget the effort of all the pastors, associates and staff who served this community since its founding nor the aide of our patron Saint Jude who has made the impossible overwhelmingly possible throughout our humble history.